Robotic Innovations (Pty) Ltd – a turnkey robotics and industrial automation specialist based in Route 21 Corporate Park, Irene – describes itself as a provider of robotic solutions to non-OEM industries. MechTech visits the company and talks to Altus Mostert, its managing director. 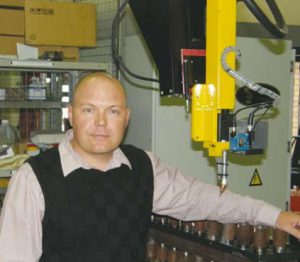 Robotic Innovations was founded by Mostert himself in 2004 – after having developed extensive experience of robotics and turnkey automation solutions while running the local branch of an overseas automation company. Mostert now describes the company as a specialist in robotic applications, “with an amazing team – the reason for our success.

“Right from the beginning, we decided to stay away from automotive OEMs and to specialise, instead, in alternative industries,” Mostert tells us. “As a result we now get a lot of work from first- and second-tier suppliers to the automotive industry – sectors that have been begging for decent service for years.”

He gives us some examples: “The automotive tier suppliers use much more MIG/MAG welding than the OEMs, where spot welding predominates – so robotic MIG/MAG welding applications have become a speciality of ours.” he explains. “We also do a lot of strange handling applications – putting up and putting down different product items – and first-of-a-kind applications – in the mining industry for example. We have taken on some pretty hectic projects. In hindsight you would think we were crazy but, at the end of the day, they work,” he adds.

“We like it when clients come to us with applications that they would like to automate with a robot but have no idea how to. That is the passion that drives us – developing applications for robotics that have never been done before.”

The company prides itself on its ability to provide automated robotic solutions that solve each customer’s unique challenges and needs. “Our services usually start with a concept design for the application a client brings to us – a broad conceptualization of how robotics can get the client’s job done,” Mostert says. “Once the client has approved the concept design and we have been awarded the project, we would do a finer detailed design of all of the mechanics. We then use these designs to do simulations using the Robo- Guide simulation package developed for use with Fanuc robots. Once everything works in RoboGuide, we would then sub-contract the full mechanical  design detail to a preferred supplier. When these detailed designs come back to us, we re-simulate functionality and only once we are sure everything works, do we tell our supplier to go ahead and build the physical system,” he says. 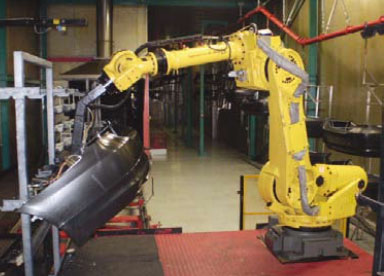 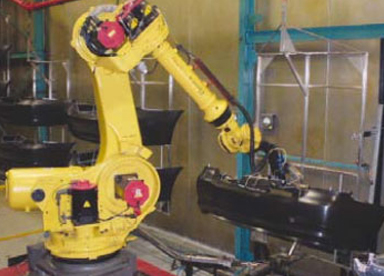 A first-of-a-kind robotic system to transfer bumper parts from the washing bay system onto the paint system. Venture in Wadeville, South Africa is the only manufacturer in the world that does not depend on humans for this application. 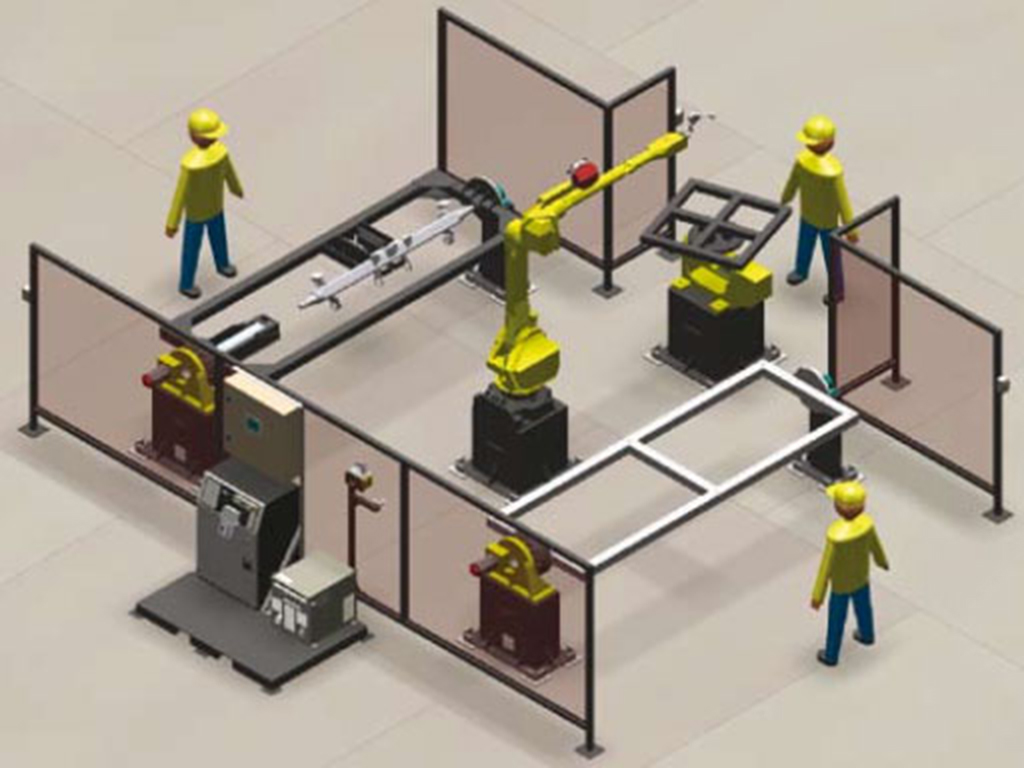 Robotic Innovations’ services usually start with a concept design for the client’s application. Robots are now much more flexible and can be justified based on far smaller production batches.

Expertise includes factory automation systems for robotic welding, robotic palletising, robotic assembly, robotic materials handling, robotic material removal and robotic machine tending. “Most of our robotic solutions consist of one or two robots working in a cell but we have done systems with as many as five robots,” adds Mostert. “Our largest targeted industry is probably the trucking industry and we have done work for all of the major players” he says.

Robotic Innovations exclusively supports four or five key brands, Fanuc for the robots, Lincoln Electric on the welding machine side, Binzel for welding torches and, on the PLC and control systems side, mostly Siemens or Allen Bradley. “We made the strategic decision not to apply for agencies,” explains Mostert. “In some ways agencies are a very nice money spinner but they are very difficult to support without backup. Instead, we have chosen companies that are, first of all, reputable and secondly, have local offices with proper technical support. If you are offering a service and you pick up a technical problem, you need to know that your suppliers are going to support you well.

“Fanuc for example, has a proper branch in South Africa; it is a fully fledged branch of Fanuc, Japan. It also has an exceptional product that is very well priced. They keep stock of the fast-movers and any specialized robots can be landed from Japan within four months. When it comes to spares, it is very rare that Fanuc will not have stock of any particular component for a robot. Its stockholding is way beyond that of anyone else,” confirms Mostert. “We are also the accredited supplier of automation systems for The Lincoln Electric Company and its distributors in South Africa,” he says. Mostert tells us about some of the applications he has been involved with. “We are currently busy with a robotic submerged arc welding application. We are going to be using two Fanuc robots and Lincoln Power- Wave AC/DC 1000s to weld the parts for the new power stations. The systems will include fully automated flux recovery systems, linear rail systems, conveyors, head- and tail-stocks and a lot of very sophisticated electronics.” 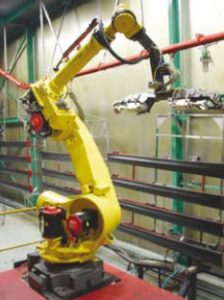 Mostert describes some handling applications his company has undertaken: “At Venture – a first tier supplier to BMW – we installed a robot to remove plastic parts from an injection moulding machine. “Most companies use linear robots for this type of pick and place application but we decided to go for a rack-mounted solution – which has a working envelope below its own base,” he explains. Also at Venture, he describes how a first-of-a-kind system transfers bumper parts from the washing bay system onto the paint system. “They used to transfer them by hand but because of contamination, the paint can come off where the bumper has been touched. Now, with the robot, the transfer takes place without any human touch. In Europe, this is still being done by hand.”

We ask why it is a difficult job. “You have hundreds of frames and none of them can be built exactly like the others. Secondly the bumper is placed on a metal bumper rack that passes through the paint system – with heaters and coolers causing all sorts of size variations. This made the design of the gripper fairly unique,” he explains. “What we do is we use sensors and floats in the robot itself. This enables us to pick up the bumper even if it is not in exactly the same position every time. The robot moves in millisecond-steps until it finds the place to grip – and vice versa on the other side, where it releases the bumper after it has found the rack.”

The advantages? “Firstly quality,” responds Mostert, “bumpers come out of the wash bay and into the paint system without being touched by any human. Secondly there is a cycle time advantage. We are loading two parts every 72 seconds or less.”

Also, Mostert tells us, you no longer have humans between two automated systems. You don’t have to make special provision for staff lunch breaks or shift changeovers. “This has totally removed a bottleneck in the production line.

“Everyone is still under the impression that robots cost millions and that jigging is cheap. In fact, it’s the other way around,” he tells us. “Robots are cheap and it is the jigging that pushes up the price of a system. But it’s getting better all the time – robot systems are now much more flexible and much cheaper. Shops that have never considered automation before are now turning to robots in record numbers,” he concludes.