Atlantis foundries have embarked on a process that will pave the way to becoming a Smart Foundry by embracing the Fourth Industrial Revolution. This project aims to combine various technologies available to gather and analyse process data, with the aim of improving product quality and cost efficiency. 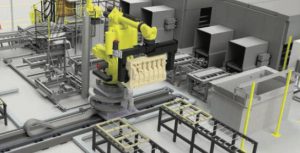 After the drying process, core vents are drilled using a Fanuc M-20iA robot. The robot will, in future, carry instruments to inspect the various cores as well as the core assembly

To further improve the quality and cost position of Atlantis Foundries, they have embarked on an ambitious plan to build a Smart Foundry. The basic building blocks for such a concept are robotics, process instrumentation, and the tracking of components using RFID and other software applications. With all the data available and it being traceable to individual castings, the door has opened to enable the use of Artificial Intelligence for process control and inspection of components.

After the vent drilling process the core package is assigned a unique sequential number from the production system Shopware. This unique number will be linked to all the data acquired for the core package

“The corner stone of the project is the programme of automation in the foundry. The Fanuc robots installed by Robotic Innovations have become the workhorse to carry instruments that acquire data while handling or performing its operations. All the data collected throughout the process by the robots and the variety of inline instruments will be linked to specific castings. At the end of the process, the entire set of process parameters including operator information will be available for each casting,” explained Pieter du Plessis, CEO of Atlantis Foundries.

The final operation in the core shop is the palletising of the core assemblies prior to storage. For this operation a Fanuc M-900iC robot is used. In future, an instrument will be fitted that carries out a dimensional assessment of the core package

“The results have been astonishing. The biggest challenge now is to keep the process within the very narrow process window that is recommended by the Artificial Intelligence algorithm. On batches where all the process parameters are achieved as recommended, we have seen internal scrap and rework dropping by 90%, and recently this has resulted in three weeks of zero scrap at the customers. Data is continuously fed into the system and new patterns are regularly discovered by the Artificial Intelligence software — as it is constantly re-training “itself” as new data is loaded into the system. This results in continuous improvements to the process control, leading to further improving the quality of our products.”

A glimpse into the project to become a Smart Foundry
The start of the project is in the Core shop with a Fanuc M-900iC dipping robot linked with automatic coating control systems, supplied by Proservice in Italy. The core drying oven, also supplied by Proservice, acquires data for each core package. Once the core package exits the core drying oven, process data such as coating density and viscosity, drying time and temperature in each zone is available for each core package. 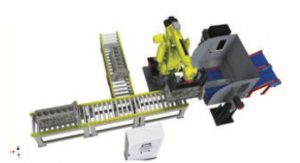 During the latter half of 2017, Atlantis Foundries will install an off-loading robot at the shot blast machine. In addition to off-loading, the robot will use the spare cycle time to perform fettling of the front and rear face of the casting

After the drying process, core vents are drilled using a Fanuc M-20iA robot. The robot will, in future, carry instruments to inspect the various cores as well as the core assembly.

After the vent drilling process the core package is assigned a unique sequential number from the production system Shopware. This unique number will be linked to all the data acquired for the core package.

The final operation in the core shop is the palletising of the core assemblies prior to storage. For this operation a Fanuc M-900iC robot is used. In future, an instrument will be fitted that carries out a dimensional assessment of the core package.

“During the latter half of 2017, Atlantis Foundries will install an off-loading robot at the shot blast machine. In addition to off-loading, the robot will use the spare cycle time to perform fettling of the front and rear face of the casting.

In order to accurately fettle, the casting’s dimensional measurements of the major features are required. As with other data it will be captured and used by Artificial Intelligence software.”

“Atlantis Foundries have also invested in a Fanuc R-2000iC, which will be used for testing and developing future fettling cells, primarily to be installed in order to alleviate the harsh working conditions required of the current manual fettling processes.” 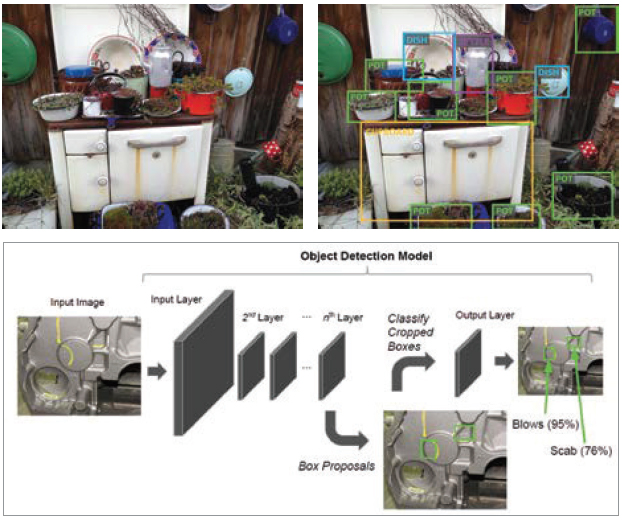 Visual inspection is a thorn in the side of many Quality Managers, where any missed defects on a casting will end up at the customer, resulting in costly rework and sorting exercises. Atlantis Foundries export of all their castings to the USA and Europe, and with these long supply lines, visual inspection failures can be very costly if castings require rework or sorting at the customer. Modern convolutional neutral-network based object detectors can process a scene containing many objects of interest, locating each object and classifying them into distinct categories and objects. This technology can be broadly applied; from identifying separate objects in a complex scene, to determining the location and extent of a visual feature.

“In the case of Atlantis Foundries the objective is the same: find the location and size of defects on the surface of the casting and optionally classify and identify the type of defect contained in the regions of interest.” “This technology was another breakthrough in our process to becoming a Smart Foundry. Not only is process data collected for each casting, but the end result is automatically recorded and the two Artificial Intelligence systems are complimentary; the prescriptive process module predicts defects and their potential location on the casting; and the inspection module visually inspects the castings to verify quality. This enables Atlantis Foundries to prevent a defective casting from being delivered to the customer, and to generate future training data.”

Process control using Artificial Intelligence
Finding the correct process parameters for castings is a daunting challenge for any foundryman. The foundry process is complex and has many separate steps, with each step having many process variables that influence the quality of castings.

“Determining the correct process parameters can be determined by following theory and using simulation software. However, theory and simulation software cannot account for all the process variations in a foundry. As we all know it is a careful balancing act, as one parameter change can solve one problem, only to create a new problem — every parameter has many degrees of influence. Different casting types also require their own unique process parameters based on their design. One approach to find the best set of process parameters is through trial and error, and given error this leads to trials and more trials.

The complex relationship between these many process parameters and the inherent variation of each parameter may lead to the incorrect conclusion being drawn from a trial. This problem is far more complex than any single variable correlation.”

“We first knocked on the door of DataProphet with this problem. How do we find sub-surface defects and what are the process parameters that give us the best results? At the first feedback session with DataProphet, we felt vindicated when Dr Michael Grant (he has two PhD’s) told us that based on 18 months of process and scrap data research, he and his team found no single direct statistical correlation between our process data and our defects. Validation that our intuition about the complexity of the foundry process is correct.”

“For each high yield cluster, a set of process parameters was established, which provided us with a process window to aim for during production.”

“The results have been astonishing, especially when we are able to achieve the correct combination of process parameters during the production of the castings. The other striking discovery was that the optimum process specification is much smaller than previously thought, very small variations in the process that was historically seen as acceptable have been shown to have a very large impact on the yield rate; while some others that we have been trying to control with precision have been shown to have less impact. The challenge now, is to constantly achieve this very narrow process window. We came to the conclusion that the only way to keep our process within this very narrow window, is to build a Smart Foundry. We believe that Atlantis Foundries’ Smart Foundry will make us the global foundry of choice for complex castings in the future.”